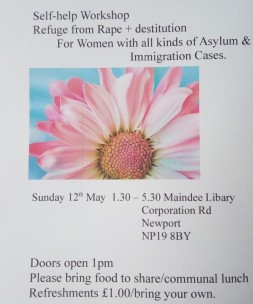 On Sunday 12 May four women from RRD travelled to South Wales looking forward to meeting friends old and new at our collective self-help workshop for women. Our team included Lucille, who had only just been released from detention! So the car journey was a chance for us all to get to know each other better. We received a lovely warm welcome at the Kurdish Community Centre in Newport with lunch and delicious Kurdish tea before gathering with a group of about ten women.

Lucille’s gripping account of how she got out of detention in Yarl’s Wood spelt out how crucial our self-help support had been by enabling her to understand how to present her experiences as grounds for asylum, encouraging other women with cases to share their experiences.

A Kurdish mother with three children broke down as she described how isolated and depressed she and her children had become after being dispersed away from her sister and other relatives in London.  When she asked for help from the Welsh Refugee Council (WRC) they told her that she had no choice about where to live.  Another woman who volunteers at WRC offered to help her go back there armed with our suggestions of a letter from her GP and a legal precedent that the National Asylum Support System (NASS) should not send vulnerable women away from their support networks.

Another mother from Syria was desperate to be reunited with her son who is still there and in great danger from the government. She also had been refused help, this time by the Red Cross – even though she volunteers there regularly – because her son is over 18. She was encouraged to fight on when we spoke about mothers in our group who had won the right to family reunion with adult children.

Some women were not asylum seekers but wanted to support those that are. Women appreciated the practical step-by-step approach to winning cases outlined at the workshop and said they would like to start their own support group. Principles like each woman needing to be centrally involved in her own case, the importance of not just leaving your case in lawyers’ hands, understanding your application and what stage it is at, and knowing what evidence is needed to strengthen your case, meant women felt they could take charge of their situation and were in a better position to ask for help from others.

Everyone was resolved to keep fighting believing that there was always something that could be done. As Lucille said, “Where there’s a will, there’s a way”!